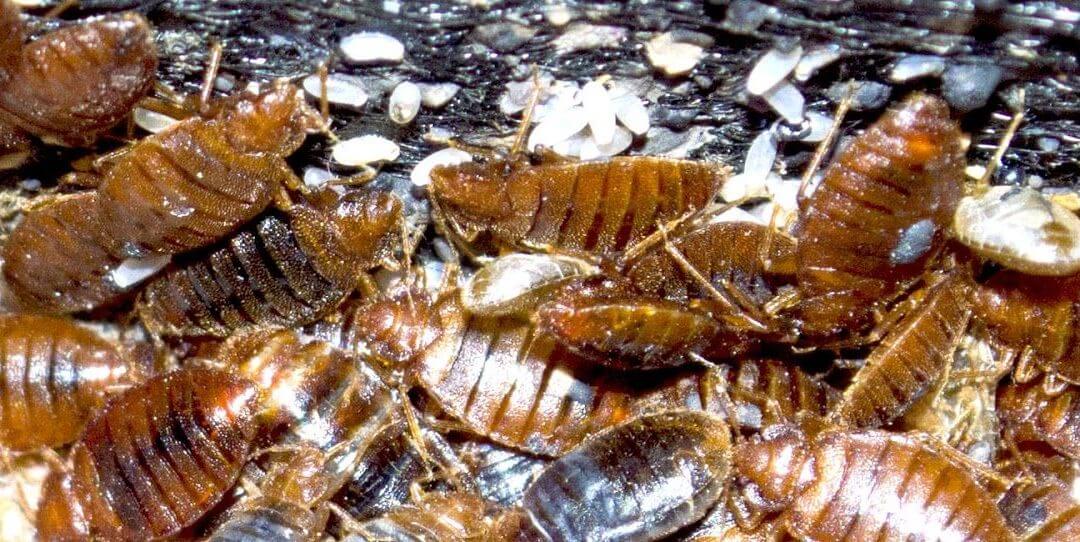 Bed bugs like each other’s company, that much we know. You usually find them clustered together in groups or aggregations, most often in narrow crevices such as in bed frames, or behind baseboards or headboards. Recently, two different research projects have provided us with more information on how and why bed bugs aggregate together.

Group living seems to provide certain benefits to bed bugs including an environment with higher humidity and temperature. In a group, it’s easier to find mates, and a group provides some safety from predators. Group living for other insects, like cockroaches, has been shown to result in faster development, too. North Carolina State University researchers, headed by Vima Saenz, studies the effects of grouping versus isolation on the development rate of bed bug nymphs. They found that nymphs in an aggregation developed in an average of 27.5 days which is 2.2 days faster than nymphs that grew up alone. Nymphs developed just as quickly when the aggregation was all nymphs with no adults present. This suggests that eggs can hatch into nymphs and found new infestations without any adults. Nymphs that develop faster can reproduce and produce eggs faster, a benefit for the bed bug population as a whole. Nymphs that develop alone, however, would actually benefit from reaching adulthood more slowly since they need to wait for the arrival of at least one other bed bug in order to reproduce

Dr Richard Naylor of the University of Sheffield, England, wondered whether there is an upper limit to the size of a bed bug aggregation. If you add more bed bugs, do the existing aggregations just get bigger as they welcome the newcomers, or do new aggregations form? Naylor studied his bed bugs in (3m) long arenas in his laboratory. Ten unfed adult bed bugs were released into the arenas each day and the location of each bug noted. These are the findings:

You can control where bed bugs aggregate. The fewer the number of bed bug hiding places (crevices), the easier bed bugs are to control. We love to find uncluttered environments, especially around the bed. Control can be improved when caulks and sealants are used to eliminate crevices around the bed, and encasements are used to eliminate hiding places in and on the bed. However, eliminating bed bug hiding places without also eliminating the bed bugs contributes to bed bug dispersal and control becomes more difficult. In other words, if bed bugs are blocked from hiding near the host, they will move to the next closest cracks and crevices elsewhere in the room, making them harder to find. And if blocked from most of the crevices in a room, they will disperse even further, into the next room or even the next apartment.